Game will apparently be on a Naomi cart (not GD-Rom).

There's a substantial amount of info (4 pages) in this months issue. I'll take a stab at it later... going to go read a bit on the can. I did pick out one blurb that states the game will scroll in different directions (sideways, diagonal).

Galchi (or garuti or whatever) consists of old Raiden & Raiden Fighters developers. The three interviewees are G.Rev's Marumaya, and Chatani and Saitou from Galchi. Note that Saito worked at not only Seibu Kaihatsu, but also Moss. Kind of sad since Raiden III looks so lame compared to the rest of them.

The game will be "wafuu" of sorts. As you can tell from he illustrations the characters are wearing kimonos. However, one of the taglines taken from the interview is "Wa that doesn't adhere to Wa". (Wa means Japanese [style] in this sense).

At first glance it seemed it would be free-roaming, but that's not the case. There are different paths, and different stages/paths will scroll different ways (diagonal, sideways, etc.). The screen is TATE for those that haven't seen the screenshots.

The game will be playable at the AM show, and they will have a location test coming up. 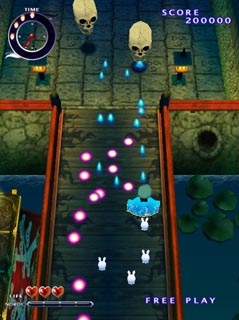 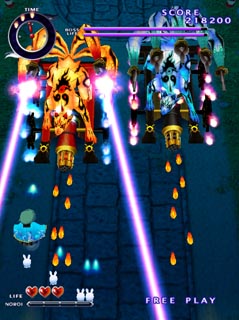 icycalm
#1 video game and art theorist in his world

No wonder the Arcadia article had that tiny screenshot.

Cave and G.rev have gone nuts! The only STG developer that didn't end up surprising anyone was MileStone.

I'd like to take the opportunity to say "hi" to our usual lurkers from Shmups Dot Com forum. They're a multitude!

i think thats the worst looking shooter so far.

Recap wrote: I do qualilty posting.

At least one of them is the one in Arcadia... it was pretty easy to tell it was awful looking, even though it was small.

Man, I don't like those character designs at all. Is that a diaper on the loli miko? And a bikini top? And are they really trying to drum up the shota-pedo appeal with that male character's bare midriff?

Users browsing this forum: No registered users and 13 guests