ZebraAirforce
Past The Newbie Stage


It -- and this counts for most arcade games -- deserves threads like these
"It's like doing speed... It sounds fun b/c everyone is doing it, and then you're like, 'what the fuck!?'"
Top

People only getting to stage 3 scares me. Maybe I should flip my TV over tonight so I can give it a shot.

ZebraAirforce
Past The Newbie Stage

Uh-oh, you guys are about to get schooled

zinger wrote:Is that a problem? It might be clue for secret scoring strategies.

Sorry though, it's just that obscure games like these packed with tons of little details with hints about japanese arcade craftmanship gives me goosebumps. Makes me wonder if there's a more detailed, japanese alternative to the some what dissappointing arcade-history.com. The science and history of the industry / culture / art form needs to be mapped out before it's too late.

Yeah finding out more about games it always good, especially in the case of something like Dyna Gear which is so obscure and strange.

Here is some info I found on other stuff the developers of this game worked on, of course its not 100% guaranteed that these are the exact same people, but oh well.

- Character Designer Kaoru Kamigiku: Worked on Countdown Vampires (Playstation game) as art director. More interestingly however also worked on the UPL game Strahl as an artist, alongside Kinya Aoyama! There we have it, I think I just figured out the connection.

But still, Kinya Aoyama isn't listed in the credits of Dyna Gear, so perhaps Kaoru Kamigiku just put his name into Dyna Gear for a joke or something.
Ara Ararauna, Blue and Gold Macaw, 32-34 inches
They are adaptable, and enjoy being in social situations. They readily become adept at performing tricks, and seem to love doing so. Cost:$900-1400
Top

Okay, I figured out Area 4 miniboss (I think). Just stand still and wait for him to roll up, duck, and you'll be okay. Got greedy and ran out of time on said stage though.

I will have to try that out. That mini boss always takes life off me even though I fully know its patterns. Still not as annoying as the Bone Dinosaur's mini-boss though, they are too random with their attacks!
Ara Ararauna, Blue and Gold Macaw, 32-34 inches

Macaw wrote:Still not as annoying as the Bone Dinosaur's mini-boss though, they are too random with their attacks!

Not having any trouble with those. Stick to the corners and bump on their bullets.

Yeah I was usually just running around in the center and they always landed on me. 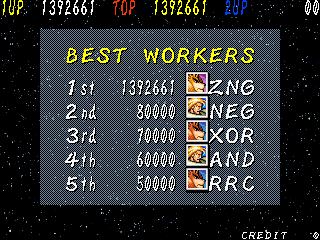 Lost one life at stage 5 boss, another four lives fighting the final boss. I had only two lives left when I cleared it (endbonus is 100k per life, I think), but I'm done! Thanks for introducing this weird game and hosting the thread. I enjoyed it lots!
Top

Whoa, the game is so much easier to clear with Wolf! I finished it with 3 lives remaining.

Considering how humorous the games style is I was shocked it had quite a sad ending. Perhaps there is a 'good' ending if you finish the game with Roger?

But finishing it with Roger is so hard!
Ara Ararauna, Blue and Gold Macaw, 32-34 inches

Did fine until I got out of the cave, then a bunch of shit happened and two lives disappeared fast.

Macaw wrote:*EDIT: Just found out this game was apparently developed by a team called 'Scarab', their only other game is 'Sokonuke Taisen Game' which came a year after Dyna Gear. Scarab was likely just made from Sammy developers that made stuff like the horrifically bad Survival Arts, a Mortal Kombat rip-off.

Damn, I wonder how on earth that site got that information, Scarab aren't credited on heaps of the games they developed.

EDIT: And what one earth is Arabian Meosis and Meosis Magic!?!?
Ara Ararauna, Blue and Gold Macaw, 32-34 inches

I was also very excited when I heard those titles, but the Meosis series seem to be slot games.

They have some pretty cool research methods, including code comparisons. You can read about it here: http://gdri.smspower.org/wiki/index.php/Research_Methods
Top

I can't post proofpic because of low postcount, so that'll do:

My guess is that you only get the good ending if you use more than 1 credit.
Top

Today I went to the arcades and saw someone playing KOF Special Edition 2004 (a hack of KOF 2002). Familiar background, anyone?

Wow, that's awesome. Do you know who made the hack?
Top

Sorry, no idea. But rom sites have this hacked version for download.
Top

Haha! I had forgotten how awesome this game is! Updated with Ruldras score.

Edit: This thread is almost like an encyclopedia of knowledge on this game

Fooling around with this yesterday and noticed the wolf character makes the same sound when he jumps as the main character in the game Vandyke (a UPL game, I think).
MegaShock!
Top

LGB
Past The Newbie Stage

You would be correct.

undamned
Past The Newbie Stage

Just thought I'd mention I actually landed this PCB yesterday (well, paid for it at least). Some seller on ebay named drkitty has started selling some pretty great stuff ($80 Boogie Wings, anyone?). I also grabbed from him. Knuckle Bash ($45), and Gaiapolis ($85). I'll let you guys know if mine is a version other than the English one in mame.
-ud

icycalm wrote:No one is really in a position to critique me at this point in time, because all who try are uneducated.

Users browsing this forum: No registered users and 3 guests